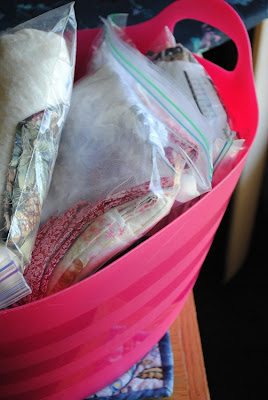 Don't beam me up yet, I have to much to do. Too many UFO's (unfinished projects) or WIP's (works in progess, as other people call them). You know, the kind of stuff you have lying around that haunts you. It speaks to you, "Hey, remember me, I am the ____ project that you were excited about, spent money on... and then forgot about". Oh, indeed I do, remember you. I had made a sommitment in January of this year to really buckle up and get some of those projects done. I have to say that I actually have finished a bunch of stuff. Of course I started a ton more as well. The above bucket is a small sampling of projects that I have to complete.

Thank you  Kat and company at Just Crafty Enough for inspiring me to get some things done. 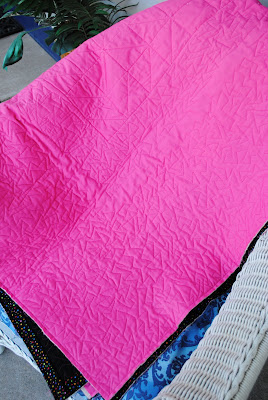 Like this for example, I had other quilts in progress but this one, because its my daughters, begged to be done first.  She really hasn't bothered me about getting it done in a long time.  But I wanted to get it done.  Her sister has her quilt on her bed and I want her to have hers. 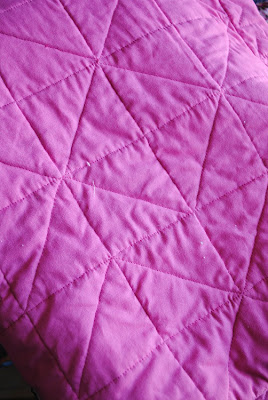 So at a day retreat this past Friday and Saturday I worked feverishly to get it quilted.  I had begun some Free motion stitching a while ago when there was a cool day but then stopped.  With all the heat, the last thing I wanted to do was get under a blanket and stitch.  I stitched in the ditch around my pinwheels and finished all the free motion stitching.  At the last hour, I added the binding. Now I am waiting for another cool day to attach all the binding.

It is called Kokopelli Dancing.  Someone, Jan, over at Quilting Revolution said that my free motion stiching reminded her of Kokopelli.  Since my daughter loves dancing I decided to name it "Kokopelli Dancing". As soon as I get the binding on I will post. 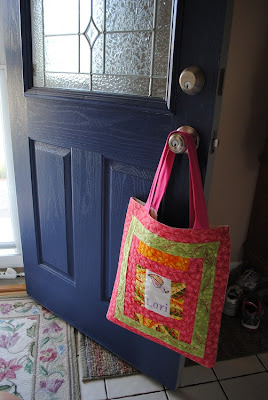 Here is my next project that has been sitting right by my table that has simply been driving me crazy.  I put it there purposely so I had to move it out of the way all the time.  This way it would persistently work its way up to the work table.  Its been like that for about four weeks.  I had to get it done. 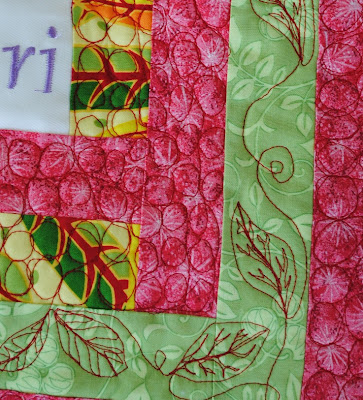 I made a few of these because they are convenient for people to have and I wanted to give some away.  I made one for my Mom as well. The center square was made when I was at an embroidery class.  I didn't want it to go to waste, so that is where it all started. 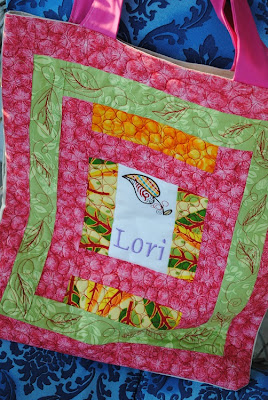 Yeah to getting things done! I'm embarrassed by the amount I have.

LOVE the title of your quilt! And it's gorgeous, gorgeous, GORGEOUS!